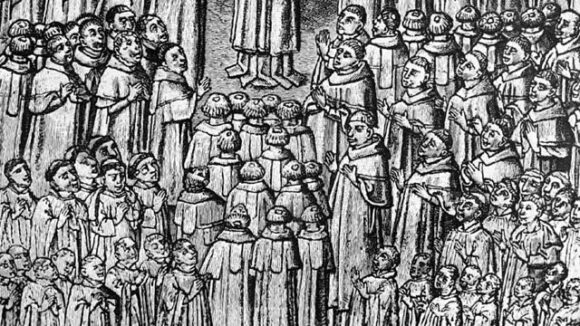 Life is Simple: How Occam’s Razor Sets Science Free and Shapes the Universe
by Johnjoe McFadden, reviewed for the Spectator, 28 August 2021

Astonishing, where an idea can lead you. You start with something that, 800 years hence, will sound like it’s being taught at kindergarten: Fathers are fathers, not because they are filled with some “essence of fatherhood”, but because they have children.

Fast forward a few years, and the Pope is trying to have you killed.

Not only have you run roughshod over his beloved eucharist (justified, till then, by some very dodgy Aristotelian logic-chopping); you’re also saying there’s no “essence of kinghood”, neither. If kings are only kings because they have subjects, then, said William of Occam, “power should not be entrusted to anyone without the consent of all”. Heady stuff for 1334.

How this progression of thought birthed the very idea of modern science, is the subject of what may be the most sheerly enjoyable history of science of recent years.

William was born around 1288 in the little town of Ockham in Surrey. He was probably an orphan; at any rate he was given to the Franciscan order around the age of eleven. He shone at Greyfriars in London, and around 1310 was dispatched to Oxford’s newfangled university.

All manner of intellectual, theological and political shenanigans followed, mostly to do with William’s efforts to demolish almost the entire edifice of medieval philosophy.

It needed demolishing, and that’s because it still held to Aristotle’s ideas about what an object is. Aristotle wondered how single objects and multiples can co-exist. His solution: categorise everything. A cherry is a cherry is a cherry, and all cherries have cherryness in common. A cherry is a “universal”; the properties that might distinguish one cherry from another are “accidental”.

The trouble with Aristotle’s universals, though, is that they assume a one-to-one correspondence between word and thing, and posit a universe made up of a terrifying number of unique things — at least one for each noun or verb in the language.

And the problem with that is that it’s an engine for making mistakes.

Medieval philosophy relied largely on syllogistic reasoning, juggling things into logical-looking relations. “Socrates is a man, all men are mortal, so Socrates is mortal.”

So he is, but — and this is crucial — this conclusion is arrived at more by luck than good judgement. The statement isn’t “true” in any sense; it’s merely internally consistent.

Imagine we make a mistake. Imagine we spring from a society where beards are pretty much de rigeur (classical Athens, say, or Farringdon Road). Imagine we said, “Socrates is a man, all men have beards, therefore Socrates has a beard”?

Though one of its premises is wrong, the statement barrels ahead regardless; it’s internally consistent, and so, if you’re not paying attention, it creates the appearance of truth.

But there’s worse: the argument that gives Socates a beard might actually be true. Some men do have beards. Socrates may be one of them. And if he is, that beard seems — again, if you’re not paying attention — to confirm a false assertion.

William of Occam understood that our relationship with the world is a lot looser, cloudier, and more indeterminate than syllogistic logic allows. That’s why, when a tavern owner hangs a barrel hoop outside his house, passing travellers know they can stop there for a drink. The moment words are decoupled from things, then they act as signs, negotiating flexibly with a world of blooming, buzzing confusion.

Once we take this idea to heart, then very quickly — and as a matter of taste more than anything — we discover how much more powerful straightforward explanations are than complicated ones. Occam came up with a number of versions of what even then was not an entirely new idea: “It is futile to do with more what can be done with less,” he once remarked. Subsequent formulations do little but gild this lily.

His idea proved so powerful, three centuries later the French theologian Libert Froidmont coined the term “Occam’s razor”, to describe how we arrive at good explanations by shaving away excess complexity. As McFadden shows, that razor’s still doing useful work.

Life is Simple is primarily a history of science, tracing William’s dangerous idea through astronomy, cosmology, physics and biology, from Copernicus to Brahe, Kepler to Newton, Darwin to Mendel, Einstein to Noether to Weyl. But McFadden never loses sight of William’s staggering, in some ways deplorable influence over the human psyche as a whole. For if words are independent of things, how do we know what’s true?

Thanks to William of Occam, we don’t. The universe, after Occam, is unknowable. Yes, we can come up with explanations of things, and test them against observation and experience; but from here on in, our only test of truth will be utility. Ptolemy’s 2nd-century Almagest, a truly florid description of the motions of the stars and planetary paths, is not and never will be *wrong*; the worst we can say is that it’s overcomplicated.

In the Coen brothers’ movie The Big Lebowski, an exasperated Dude turns on his friend: “You’re not *wrong*, Walter” he cries, “you’re just an asshole.” William of Occam is our universal Walter, and the first prophet of our disenchantment. He’s the friend we wish we’d never listened to, when he told us Father Christmas was not real.