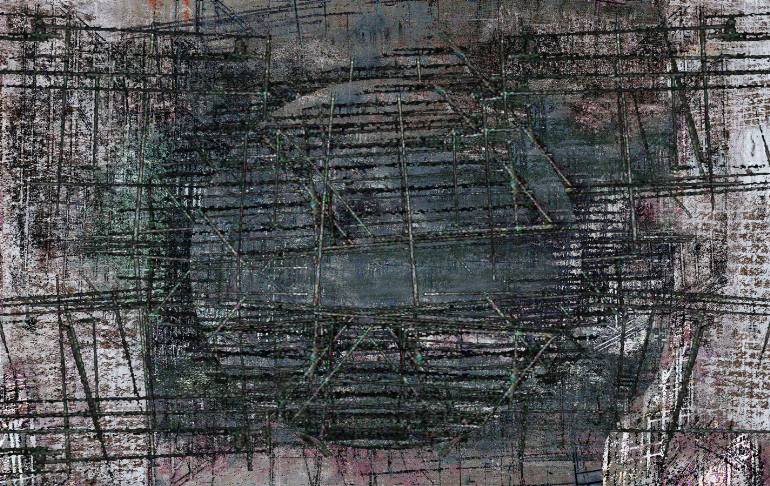 A virus that robbed David Jane of his language and memory left him struggling to understand what had happened to him. His salvation was to recreate his condition on canvas. For New Scientist, 10 January 1998

DAVID JANE’s studio in south London is falling to pieces. Plaster has come
off the walls, revealing the wattling and brick beneath. Felt sags from a hole
in the roof. Every fractured surface frames another deeper, broken layer. It is
easy at first—and painful—to see parallels between the dereliction
of Jane’s studio and his paintings, which are based on magnetic resonance
imaging (MRI) scans of his own, damaged brain. “It can be a very heavy
experience to be drawing things that you know are inside you,” muses Jane. “They
look like animals—like they have separate lives.”

Jane calls his work self-portraiture, albeit of a unique, and at first
disturbing, kind. Wax surfaces bleed away to reveal other surfaces beneath.
These frames within frames reflect the way the medical scanner slices his brain
into a sequence of flat, two-dimensional images. But Jane’s fusion of art
and science is not about deterioration. It is about understanding—and more
than that, it is about recovery and regeneration.

Until 1989, Jane enjoyed a growing reputation as a painter. But that year,
while on holiday in Rio de Janeiro, he collapsed. When he woke up in London some
weeks later, he could not speak, write or recognise his family or himself. At
first he had no memory, and no awareness of the passage of time. Days, minutes,
months all seemed of equal duration, so that even when some memories did return,
he could make little sense of them. On one occasion he left the hospital in his
dressing gown and boarded a bus to visit his mother, who was dead. Much of his
recovery since then has been spent organising his experience into some kind of
sensible order.

What Jane didn’t know during his stay in hospital—what nobody could
tell him—was that he had contracted herpes simplex encephalitis. For
reasons that are still unknown, the virus has a predilection for certain areas
of the brain in some people. The body’s response is to dispatch immune cells to
the site of infection. This causes swelling which, together with the virus, can
kill off neurons and literally leave holes in the brain. In Jane, the virus
targeted the left temporal lobe, which is responsible for memory and
language.

Jane’s basic faculties began to return within a few weeks and he was able to
leave hospital. But it was not until June 1990—when new MRI scans were
taken—that he began to understand what had happened to him. Because he had
lost his language skills to the virus, Pat, his wife, realised that pictures
would be the easiest, most direct way of explaining to him what had happened. It
was she who first showed him the brain scans.

“The doctors were reluctant to show me them,” he remembers. “But the fact is,
I found them beautiful.” Jane could also see from the scans that the left-hand
side of his brain was different from the right. “So I began to understand what
had happened inside my brain.”

Jane began to use his skills as an artist to make simple ink and pencil
copies of the pictures he was shown. The copies were crude and amorphous,
literal reflections of the scans. But in the eight years since the virus struck,
Jane has made a remarkable recovery—and it’s all there in his work. His
drawings of tissue have given way to paintings that depict images of the mind
and then to full-scale exhibitions. Visceral and urgent, Jane’s images are an
amalgam of abstract style and biography, combined in ways which he could never
have imagined before his illness. And his originality is attracting attention:
the canvases have fired the enthusiasm of critics and collectors.

Jane’s growth as an artist has coincided with a burgeoning ability to face
hard truths. “I’ve been using a computer lately to manipulate some recent
scans,” he says. “It’s been depressing, seeing so clearly how much brain I’m
missing.”

The herpes infection left Jane inhabiting a very strange world. Just how
strange can be gleaned from the fact that he had to relearn many things from
scratch, such as the names of different parts of the body. His regained mastery
of speech is something he can largely credit to his son, Frank, who was born in
1991. The child’s appetite for bedtime stories gave Jane a perfect
reintroduction to words. Reading to his son, he acquired the language by easy
stages, as a child might.

Jane’s recovery is not total. Names still elude him, and reading is difficult
and slow. “Even manipulating images on a computer is taking me ages,” he laughs.
“I can’t follow the bloody menus.” Nevertheless, it is staggering how much he
has relearnt—and how he relearnt it. His damaged brain’s appetite for
learning continues to amaze him. “I remember I wanted to learn English,” he
says, “but what I ended up with at first was something completely different. The
spellings were all wrong, but they had this weird internal consistency. It was
as though my brain knew better than I did how to learn. It was rewiring itself
into a shape that suited itself. Me, I was just along for the ride.”

That sense of alienation—of surfing a healing wave over which he has no
control—has never entirely gone away. “I feel I have a relationship with
what’s inside of me,” he says. “Obviously I can’t actually separate `it’ from
`me’, but there is some sort of dialogue there.” Jane has learnt to harness that
dialogue in his work. “The distance I feel between my self and the brain I see
in the scans—I try to turn that into the distance that an artist has to
their subject,” he says.

Over the past eight years he has continued to succeed at his task. As he got
better, the images from which he works—the scans
themselves—underwent remarkable technical improvement. Unlike the earliest
images of his brain, MRI today generates high-resolution colour pictures. These
advances have helped to fuel Jane’s imagination. “Over time, my paintings get
less and less like illustrations,” he explains. “These days you won’t find
literal correspondences between the paintings and the scans. On the other hand,
thanks to those scans, my understanding of what happened, and what each part of
the brain does, gets more and more precise.”

In 1994, Jane began to add solidity and texture to his works by painting in
wax. For a long time he has wanted to get rid of the signatures in his
work—the array of distinct brush strokes. “You don’t necessarily want to
put your emotion into every stroke,” he says. “The emotion belongs to the piece
as a whole.”

He has found a way to “draw with heat”, often burning holes in a painting
with a blowtorch. By putting several such sheets together, Jane mimics the
effect of looking at the scanned slices of his brain. Behind one layer of tissue
lies another. He turns the canvases as he works, forcing the wax to run in all
directions, creating images that echo the destruction of his own brain. “Looking
at the scans,” he says, “it’s clear my disease wasn’t very interested in
gravity. It moved freely in three dimensions. The damaged shape has a weightless
quality.”

In cultural terms, Jane sees his brand of portraiture, with its scientific
foundations, as a completely natural part of a continuing tradition. “I don’t
think there’s a clear distinction between art and science,” he says. “They
change at the same time.” This progressive partnership has been in evidence
since at least the 16th century, he says. He speaks with authority, although it
is a curious consequence of his condition that he cannot give the names of the
artists who would prove his point. Those memories are no longer there.

But he remains undeterred. His latest venture is also his most ambitious: a
collaborative exhibition with his neurologist, Michael Kopelman of St Thomas’
Hospital in London. Kopelman, together with Alan Colchester’s image-processing
team at the University of Kent in Canterbury, has taken a new series of scans of
Jane’s brain and created three-dimensional images of it. Jane intends to enlarge
these pictures to about 2 metres square and then work wax, pigment oil, charcoal
and other materials into the images to enhance their 3D appearance. Then he will
overlay pages of text taken from reports by doctors, critics and scientific
commentators, so the pictures become a palimpsest of experience and
interpretation.

“We can meld science and art together,” says Jane. “And we’ll do that not to
obscure what’s going on, or prettify it, but to make it clear. Dr Kopelman and I
want to open the doors of understanding into the scientific interpretation and
artistic vision of brain scan images, so that people can see them as things of
beauty as well as knowledge.”

For many critics, however, Jane’s work far exceeds these stated ambitions.
“When you look at David Jane’s work,” says Denna Jones, curator at the
London-based Wellcome Centre for Medical Science, “your reactions aren’t
anything to do with disease. It’s not even to do with that interest in
body-mapping you see so much of these days. It’s simply a continuation of
self-portraiture—part of a tradition five centuries old.” If the
18th-century painter William Hogarth had had access to the technology Jane uses,
“he’d probably have done the same thing”, says Jones.

Jane doesn’t disagree. “I was always considered an abstract artist and I
never felt happy with that,” he reflects. “I certainly can’t be called
`abstract’ now, at any rate. You can’t get more visceral than to paint your own
brain.”