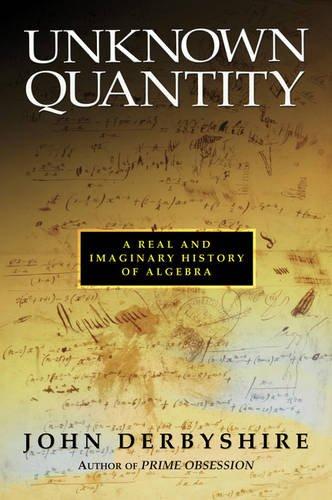 Unknown Quantity: a Real and Imagined History of Algebra by John Derbyshire
reviewed for the Telegraph,  17 May 2007

In 1572, the civil engineer Rafael Bombelli published a book of algebra, which, he said, would enable a novice to master the subject. It became a classic of mathematical literature. Four centuries later, John Derbyshire has written another complete account. It is not, and does not try to be, a classic. Derbyshire’s task is harder than Bombelli’s. A lot has happened to algebra in the intervening years, and so our expectations of the author – and his expectations of his readers – cannot be quite as demanding. Nothing will be mastered by a casual reading of Unknown Quantity, but much will be glimpsed of this alien, counter-intuitive, yet extremely versatile technique.

Derbyshire is a virtuoso at simplifying mathematics; he is best known for Prime Obsession (2003), an account of the Riemann hypothesis that very nearly avoided mentioning calculus. But if Prime Obsession was written in the genre of mathematical micro-histories established by Simon Singh’s Fermat’s Last Theorem, Derbyshire’s new work is more ambitious, more rigorous and less cute.

It embraces a history as long as the written record and its stories stand or fall to the degree that they contribute to a picture of the discipline. Gone are Prime Obsession’s optional maths chapters; in Unknown Quantity, six “maths primers” preface key events in the narrative. The reader gains a sketchy understanding of an abstract territory, then reads about its discovery. This is ugly but effective, much like the book itself, whose overall tone is reminiscent of Melvyn Bragg’s Radio 4 programme In Our Time: rushed, likeable and impossibly ambitious.

A history of mathematicians as well as mathematics, Unknown Quantity, like all books of its kind, labours under the shadow of E T Bell, whose Men of Mathematics (1937) set a high bar for readability. How can one compete with a description of 19th-century expansions of Abel’s Theorem as “a Gothic cathedral smothered in Irish lace, Italian confetti and French pastry”?

If subsequent historians are not quite left to mopping-up operations, it often reads as though they are. In Unknown Quantity, you can almost feel the author’s frustration as he works counter to his writerly instinct (he is also a novelist), applying the latest thinking to his biography of the 19th-century algebraist Évariste Galois – and draining much colour from Bell’s original.

Derbyshire makes amends, however, with a few flourishes of his own. Also, he places himself in his own account – a cultured, sardonic, sometimes self-deprecating researcher. This is not a chatty book, thank goodness, but it does possess a winning personality.

Sometimes, personality is all there is. The history of algebra is one of stops and starts. Derbyshire declares that for 269 years (during the 13th, 14th and early 15th centuries) little happened. Algebra is the language of abstraction, an unnatural way of thinking: “The wonder, to borrow a trope from Dr Johnson, is not that it took us so long to learn how to do this stuff; the wonder is that we can do it at all.”

The reason for algebra’s complex notation is that, in Leibniz’s phrase, it “relieves the imagination”, allowing us to handle abstract concepts by manipulating symbols. The idea that it might be applicable to things other than numbers – such as sets, and propositions in logic – dawned with tantalising slowness. By far the greater part of Derbyshire’s book tells this tale: how mathematicians learned to let go of number, and trust the terrifying fecundity of their notation.

Then, as we enter the 20th century, and algebra’s union with geometry, something odd happens: the mathematics gets harder to do but easier to imagine. Maths, of the basic sort, is a lousy subject to learn. Advanced mathematics is rich enough to sustain metaphor, so it is in some ways simpler to grasp.

Derbyshire’s parting vision of contemporary algebra – conveyed through easy visual analogies, judged by its applicability to physics, realised in glib computer graphics – is almost a let-down. The epic is over. The branches of mathematics have so interpenetrated each other, it seems unlikely that algebra, as an independent discipline, will survive.

This is not a prospect Derbyshire savours, which lends his book a mordant note. This is more than an engaging history; it records an entire, perhaps endangered, way of thinking.