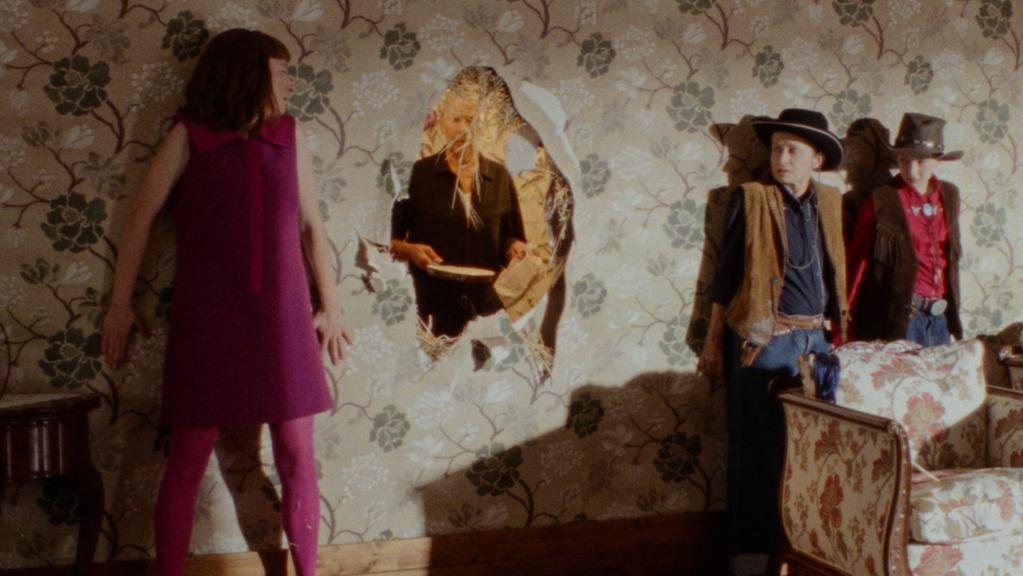 Visiting Tonight the World, Daria Martin’s new show at the Barbican, for the Financial Times, 5 February 2019

The terrible thing about dreams is that you cannot look away. You cannot peek around corners. You cannot glance at your feet. You must see – and cannot unsee – what you are given.

And while video games sometimes offer you the opportunity to shift from first to third person, so that you can see your avatar operating in the game, for the most part you’re suspended, disembodied, in a dream.

The house is real enough: a modernist redoubt just outside Brno, built by architect Ernst Wiesner in the late 1920s for Susi’s father, the Jewish textile manufacturer Alfred Stiassni. Later, the house was home to a string of Czech presidents. House guests included Fidel Castro.

Students from Oxford University and from the University of Masaryk in Brno recorded the building using photogrammetry, and it’s their data that powers Martin’s videogame. They scanned most of the rooms, and more or less all the furniture, but none of the objects. This is one reason why the gameable villa Stiassni is furnished but unadorned. Blank white canvases in white frames hang from white walls. The shelves lining the library are empty. The only objects here are game objects, seeded into the scene so as to reveal, on a click, glimpses of the house’s history.

At this point, Martin’s show could go either way. We could be in for a rather stilted, tech-heavy exploration of her family’s fraught history. (Susi Stiassni fled Nazi occupation with her family in 1938, first to London, then to Brazil, finally to California.) But the way gallery has been decked out suggests (rightly) that a warmer, more intimate, ultimately more disturbing game is afoot. Past the first screen, fellow gallery-goers bleed in and out of view round a series of curved wooden walls painted a warm terracotta. Is the colour a reference to interwar architecture? All I can think of is the porn set in David Cronenberg’s existentialist shocker Videodrome. There is something distinctly fleshy going on.

Tonight the World turns out not to be a show about Susi Stiassni’s life; not, anyway, about those parts of her life that anyone else could have witnessed, or participated in. It’s about Susi’s dreams, which she recorded year after year in a colossal typewritten diary. We get to see some of her work, hung up like a vast storyboard, through a gap in one of the walls.

This diary provides the storyline for five short films, looping on a huge curved screen at the farthest end of the gallery. In each dream, four actresses play Susi at different life stages; chief among them, and the eldest, is Hayley Carmichael. She was the eponymous Hunger Artist in Martin’s 2017 film, which won the Film London Jerwood prize last year. Carmichael is extraordinary: she serves up pathos by the yard just by standing still and staring.

In one film Susi confronts an army patrol; in another, she discovers a proletarian man living in a wall space behind her living room. The page from Susi’s diary which describe these dreams are pinned on a wall nearby. In one, Susi writes: “I call in that we are the Korean army… Actually the Korean army isn’t us but they are just outside the house.”

We’re not just talking about disembodiment here. We’re talking about the dislocation of the survivor; about the strategies of identification and alienation by which a human psyche eludes mortal threat. These dreams are about being several people at once, in the hope that at least one of you will survive.

An episodic film about dislocation with four actresses playing the same person: what, one is tempted to ask, could possibly go right? But Martin maintains control — indeed, makes the dreams both comprehensible and gripping, in a way that other people’s dreams almost never are — by keeping an iron grip on the viewpoint. You never feel as if you’re looking through a camera; you’re always looking through the eyes of one or another Susi. Now and again, points of view are established before the characters doing the looking step into the appropriate part of the frame. It’s a neat trick and one that’s quite difficult to pull off: the same bit of film grammer Andrei Tarkovksy played with in Mirror.

Given her previous work — a Kafka adaptation, films about mirror synaesthesia, intimacy and robots — it’s hardly a surprise to find Daria Martin’s current show steeped in the uncanny. But how well does it all hang together?

Better in the viewing than in the telling, I suspect. Words imply chronology, and that’s very much not what this show is about. Susi’s dreams were shaped by her history, but they don’t depict that history. The men coming in through the windows of her half-forgotten family home are as likely to be Koreans as Nazis. They could be tourists, or players of a video game, or a Californian child (Daria Martin herself, perhaps) dressed as a cowboy. All times are one; all fears are universal.

Tonight the World is certainly an “immersive” experience, for what that word is worth. A dark, echoey interior, objects seen through chinks, and single pages that stand for whole manuscripts: there’s a little bit of Punchdrunk theatre company’s Tunnel 228 about the enterprise. There’s also an attempt, which doesn’t quite pay off, to have a piece of imagery from Martin’s video game bleed into the gallery space. This invasion comes across as more of a joke than a psychic rupture: a measure of how monomaniacally exact you have to be, if you want to conjure fantasy in real space.

What of that video game? Though it’s a chilly, jerky and rather daunting way to open the show, the mathematically rendered villa Stiassi — stripped of objects, provenance and affect — sets the right tone, I think, particularly in relation to the very next object Martin offers us: a chink in a wall, housing a small family photograph of the villa as it really was: a home filled with lace and rugs and books and bric-a-brac and life. The world is empty, until we ourselves enchant it — with monsters, or delights.