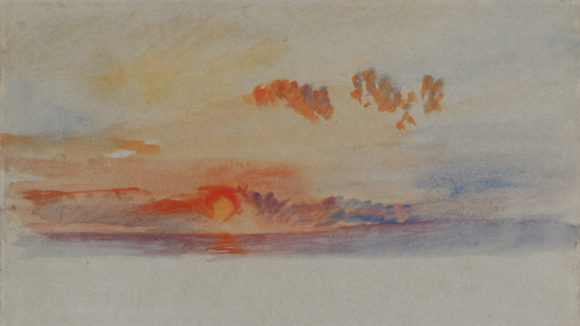 Cyril Connolly, literary lion of the 1930s, reckoned that the surest way of killing off writers was to baff on about their promise. Calling artists “visionary” might have the same effect now.

A new show at Turner Contemporary in Margate juxtaposes JMW Turner watercolours with work by Scottish-born conceptual artist Katie Paterson. The fit seems reasonable. Both artists are fascinated by light. But Turner was a visionary artist, while Paterson, born 1981, is not.. Her value (and it’s considerable) lies elsewhere.

Turner’s deft atmospheric squiggles hang next to an airfreight parcel, a shelving unit full of light bulbs and several thousand photographic slides depicting nothing. Paterson defends the wheeze with spirit: “I don’t find my work itself scientific,” she writes, on wall information at the head of the exhibition. “It deals with phenomena and matter, space-time, colour and light, the natural world as materials. Like Turner’s work, it is rooted in sensory experience.”

True, you can find sensory experience if you go looking for it. Her 2007 piece “Earth-Moon-Earth” used Morse code to bounce the score of Beethoven’s Moonlight Sonata off the Moon. An automated piano performs the rather gappy version that survived the round-trip. The moment you wonder where the missing notes went, you enter dreamland. 289 replacement light bulbs sit ready to power Light bulb to Simulate Moonlight (2008) through the course of an average human lifetime. They are tuned to exactly recreate the effulgence of a full moon. I stepped into the installation expecting nothing, only to be propelled in my imagination back to the night walks of my childhood.

But sensory experience doesn’t sit at the heart of every Paterson work, or even many of them.

There’s lots of precision. “It needs to be accurate to be imagined,” says the artist of a 2008 wheeze in which people phoned up Iceland’s Vatnajökull glacier to hear it melting in real time. If all you got was the artist splashing about in her kitchen sink, what would be the point of the work?

Her literalistic approach pushes Paterson into entertaining contortions. Alongside her concern for accuracy and truth, I think we should add a love of logistics. Second Moon (2013-14), a fragment of the Moon sent on a year-long journey counterclockwise around the earth via air freight, is a game of scale in which human and astronomical perspectives vie for contention. Other projects haven’t gone as smoothly. For five years Paterson sent letters of condolence to friendly astronomers, marking the deaths of individual stars. Dying Star Letters (2011-present) threatened to overwhelm her, however as improvements in observation caused her inbox to overflow with stellar deaths.

A core of necessary failure is present in many of Paterson’s pieces. Some projects are threatened by technological obsolescence. The 2,200 slides of empty space that make up The History of Darkness (begun in 2010) can only be added to for as long as someone makes slides (they’re already difficult to get hold of). A brand-new piece for this exhibition is a spinning wheel depicting the overall colour balance of the universe throughout its history. Its inks are pinpoint-accurate for now, but in two years’ time, when they have faded ever so slightly, what will The Cosmic Spectrum (2019) be worth?

Turner never had this problem. His criterion of truth was different. Paterson cares about measurement. He cared about witness. An honestly witnessed play of light against a cloud can be achieved through the right squiggle. An accurate measurement of the same phenomenon must be the collaborative work of meteorologists, atmospheric scientists, astronomers, colour scientists, and who knows how many other specialists, with Paterson riding everyone’s coat-tails as a sort of tourist.

As a foil for Paterson, we need someone who invents the world out of words, who thinks in conceits and metaphors, and who explores them with an almost naive diligence.

We need John Donne. “On a round ball / A workman that hath copies by, can lay / An Europe, Afric, and an Asia, / And quickly make that, which was nothing, all”. These lines from A Valediction: of Weeping come far closer to defining Paterson’s practice than anything Turner can offer. Donne’s Holy Sonnets, especially, are full of the sorts of questions that power Paterson’s art. “Thou hast made me, and shall thy work decay?” “Why are we by all creatures waited on?” “What if this present were the world’s last night?”

Mounted on the wall of Turner Contemporary, Paterson’s ideas include “The universe rewound and played back in real time;” “A wave machine hidden inside the sea;” “A foghorn set off at sea every time a star dies.” Not content with setting down her ideas in words (though you can buy a book of them here, printed in ink mixed with ground-up meteorite), Paterson tries to make the more doable ones actually happen. Her artworks are the koans of Zen meditative practice made real — or as real as the world allows.

Paterson’s out to celebrate the hugeness of our imaginations, while recognising our physical and temporal littleness. She’s not visionary; she’s metaphysical. The show’s terrific, but Turner’s not the right foil. 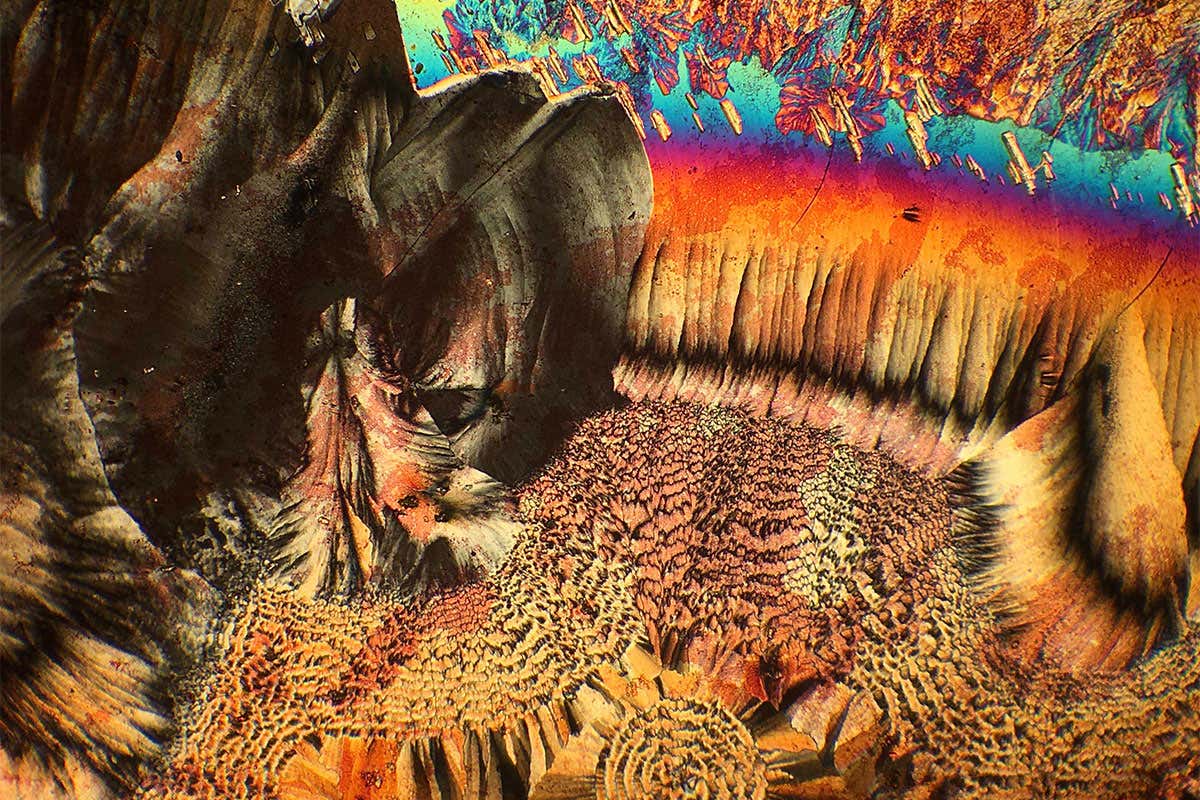 Untitled Gallery was founded in Sheffield in 1979. It specialised in photography. In 1996 it was renamed Site Gallery and steadily expanded its remit to cover the intersection between science and art. Nearly 30 years and a £1.7million refit later, Site Gallery is the new poster child of Sheffield’s Cultural Industries Quarter, with an exhibition, Liquid Crystal Display, that cleverly salutes its photographic past.

Liquid Crystal Display follows this photographic logic to its end. This is a show about the beauty, weight and messiness of materials we notice only when they’ve stopped working. It’s about the beauty created by a broken smartphone screen, a corroded battery, a cracked lens.

Site Gallery’s new exhibition – a cabinet of curiosities if ever there was one – collides science and art, the natural and the manufactured, the old and the new. It puts the exquisite sketches of 19th-century Scottish chemist and photographer Mungo Ponton (detailing his observations of how crystals polarise light), next to their nearest contemporary equivalent: microscopic studies (pictured) of liquid crystals caught in the process of self-organisation by Waad AlBawardi, a Saudi molecular biologist who’s currently in Edinburgh, researching the structure of DNA organisation inside cells.

This provocative pairing of the relatively simple and the manifestly complex is repeated several times. Near a selection of crystals from John Ruskin’s mineral collection sit the buckets, burners and batteries of Jonathan Kemp, Martin Howse and Ryan Jordan’s The Crystal World project, a tabletop installation recording their hot, smelly, borderline-hazardous effort to extract the original minerals from bits of scavenged computers. Curated by Laura Sillars, assisted by Site Gallery’s own Angelica Sule, Liquid Crystal Display reveals the material, mineral reality behind our oh-so-weightless holographic world of digital imagery. “Liquid crystals polarise light, produce colour and yet, as a material form, recede into the background of technology,” Sillars wrote in the catalogue to this show. 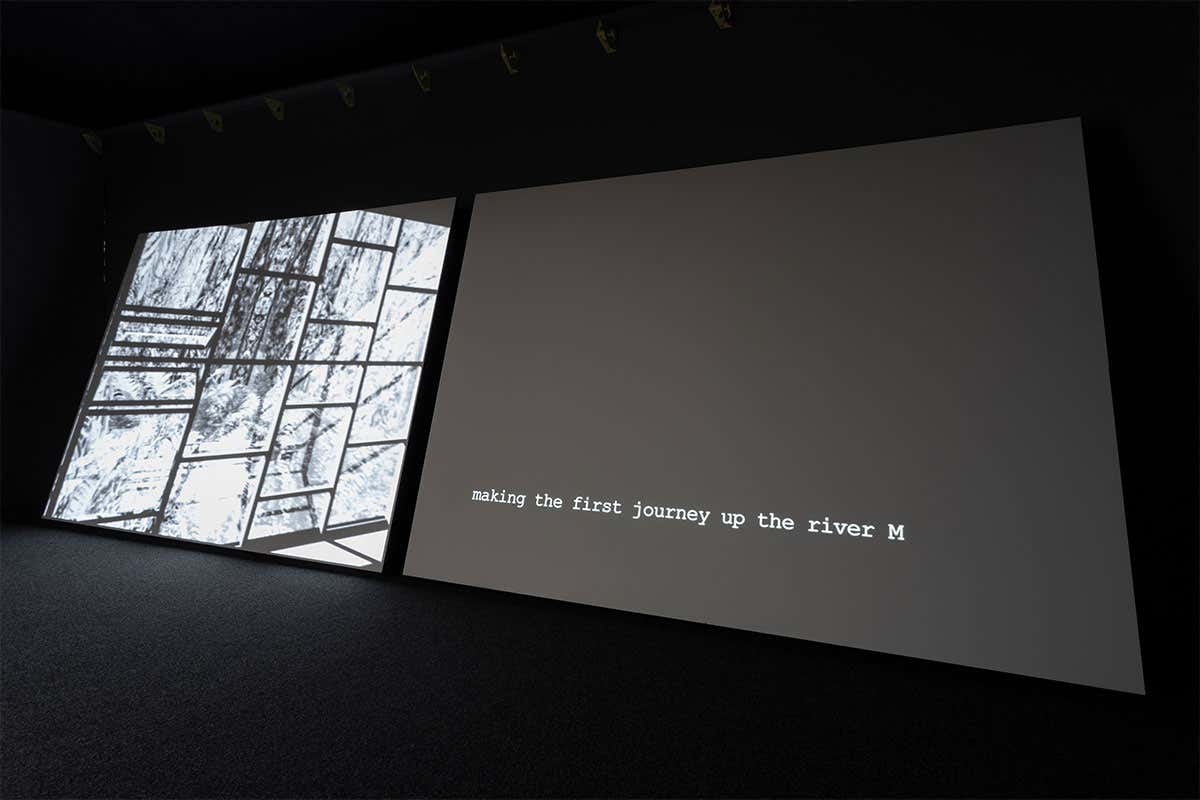 This awareness is not new, of course. In the 1960s, liquid crystals were being burned on overhead projectors to create psychedelic light shows. J G Ballard’s novel The Crystal World (1966) concocted a paranoid vision of a world and a civilisation returned (literally) to its mineral roots. That story receives a handsome homage here from the scifi-obsessed Norwegian artist Anne Lislegaard, whose stark monochrome animation (above) turns the sharp shadows and silhouettes cast by contemporary domestic furniture into insidious crystalline growths.

Arrayed within Anna Barham’s peculiar hexagonal cabinetwork, a gigantic piece of display furniture that is itself an artwork, the pictures, objects, films and devices in Liquid Crystal Display speak to pressing topical worries – resource depletion, environmental degradation, the creeping uncanny of digital experience – while at the same time evoking a peculiar nostalgia for our photochemical past.

The exhibition lacks one large signature object against which visitors can take selfies. A peculiar omission in a show that’s relaunching a gallery. And a bit of a shame for an exhibition that, in its left-field way, has handsomely captured the philosophical essence of photography.